The Shipibo Community in Lima

When you book with an account, you will be able to track your payment status, track the confirmation and you can also rate the tour after you finished the tour.
Sign Up
7524

Why Book This Tour?

Do not hesitate to contact us through WhatsApp. We are happy to help!

This off-the-beaten-path Lima experience is fun, educational and very Peruvian. It is perfect for those that need a break from archeology and architecture but still want to learn more about Peruvian culture and its diversity. On this Lima tour and cultural exchange, we visit an urban community of the Shipibo-Konibo, an indigenous Amazonian people. The Shipibo are known in Peru for their very recognisable art and handicrafts. In particular the Shipibo textiles are very popular Peruvian handicrafts.

During the tour, we learn more about Shipibo art, culture and traditions, and their interesting but often tragic history and current reality. But we’ll also enjoy a delicious and typical Amazonian lunch with our host family and will see and try out Shipibo techniques for ourselves. If you’re more of an observer, that’s perfectly fine as well!

Pick-up from hotels in central areas. Pick-up at cruise shuttle stop or airport available for an additional fee.

What to expect on this Lima tour

The guide and driver pick you up from your hotel at 9:30am (or later if you prefer) and together you head past the historical center of Lima to Cantagallo, the neighborhood where the Shipibo-Konibo settled a long time ago. It is about a 45-minutes drive if the traffic is not too bad but you won’t get bored looking through the window.

Today, we’ll meet several members of this urban indigenous community and learn more about their culture, traditions and recent history.

The Shipibo in Lima

The Shipibo-Konibo indigenous people traditionally live in the Ucayali river basin in Peru’s Amazon region. They arrived from Ucayali to Lima in the 1990s and became the first native urban community in Peru. Its members identify themselves as an indigenous community and maintain their language, art, knowledge and internal rules related to coexistence.

They settled on the Cantagallo Island in the Rímac River where they built their own community. The population grew each year until 2016, when the Shipibo-Konibo of Cantagallo lost everything in a devastating fire, including their sewing machines and other tools needed for their artisan trade.

Some survivors moved to other areas for a while and work now in the textile industry. Others, however, tried and still try to recover from the tragedy and resume their business. In 2019, the Shipibo-Konibo in Lima decided to take fate into their own hands and move back to Cantagallo, where they are living today again together as a community. Bit by bit, they’re rebuilding their community.

On this tour, we meet several strong Shipibo artisans who are fighting to preserve their traditions and to keep their culture alive. They struggled and had to start again from the bottom, but they have found a good way to get ahead by showing and teaching their art. Not only the typical Shipibo textiles and handicrafts, but also modern Shipibo fashion.

We not only get to see but also participate in and try out some of their most famous cultural heritage, such as the Shipibo art techniques and their delicious Amazonian cooking.

After all this learning and fun, your guide and driver drops you back off at your hotel around 2:30pm (exact time depends on traffic).

How does your visit leave a positive footprint?

The Shipibo-Konibo community has had a tough time in Lima. After the devastating fire that destroyed their urban community, many of the artisans went to work in factories. The few that decided to continue the trade had to start all over.

Your visit supports these survivors both financially and mentally. It encourages them to continue not only the artisan trade but also the conservation of their indigenous traditions. At the same time, it also brings them some extra income through the workshops and cooking lunch.

Prices are in USD and per person.

Pick-up and drop-off can be added from the airport or Callao port for an additional fee of 40 USD (per group). 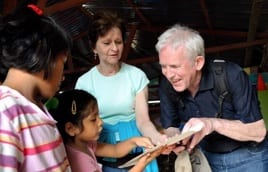 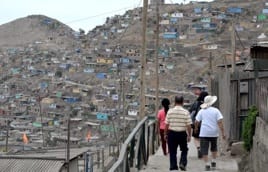